Garrett Gibbons made a kid-friendly radio edit version of Thrift Shop. We like it for several reasons. 1) we can play it on radio 2) it proves the song doesn't need the extras. Regardless of which version the track and video merit a mention because while recycling stands on its own as a motive to thrift shop, to be able to create your own style is entirely a talent in itself. Anyone can buy a look, only a few can build it or create a new one. And at no other time (that we can think of) has a track been better placed as a pop-rap release, because the ones listening to this will fall into one of two camps. For too long now music's been out of the hands of the one camp, and in the ears of the other. The industry, despite the democratisation of mp3s and bedroom studios, is flooded with privileged kids whose parents have driven them, parking outside for auditions, shopping for their wardrobes... Not since the 80s has a music genre belonged to a class. Take it back!
0 comments
Email ThisBlogThis!Share to TwitterShare to FacebookShare to Pinterest
Labels: class, clean, edit, genre, music, play, Radio, rap, recycle, resonancefm, thrift, track, video 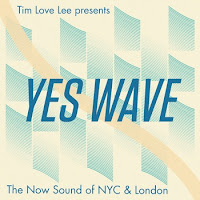 While not every track's a gem, this album's getting it at least 90% right, with a blend of acoustic jazz instruments, swing, big band, ethnic percussion and voice occasionally peppered by varying registers of electronics.

Yes Wave is a new compilation album released on August 5th, so very right for now that it's a little disconcerting. Summer, no longer feeling resilient faced with the prospect of autumn's stealthily approaching cape. There's a knowing in this album, yet a sense of discovery that suffuses it with optimism.

Brilliantly curated contributions by Melt Yourself Down and Sons of Kesmet are reminiscent of glorious big band sounds, yet they're only composed of a few instruments. Clarinets, sax, tubas...not what you'd expect to be hearing on the dance floor but then why not? Surely we're all flush with digital sounds by now?

Dawes plays a kind of sultan-style, rhythmic and tribal track laced with surprises, while Janka Nabay & The Bubu Gang make this Somebody a new fusion of Shangaan and ethno-funk. The distributors have described the compilations hi-nrg-ethno-jazz-kraut-pop, we think this is over complicating it. Have a listen and let us know what you think. The last track Superhuman Happiness with Second Heart is a last nod to the title. Yes Wave looks back at the last New Wave to hit the shore, with late 80s programming and vocal effects.
1 comments
Email ThisBlogThis!Share to TwitterShare to FacebookShare to Pinterest 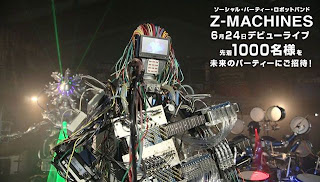 With digital production robotising sound anyway, what's to stop us delving into entirely mechanised performance? Naturally robot-mad Japan is at the forefront of this quest and has now staged an all-robot performance. Who needs humans hey? Get robots to perform, never a note out, never a dull moment as the world-weary touring artist reaches for the first dirnk he's had since yesterday's wild party, and musters a comment for the eager crowd, robots are guaranteed to deliver because they come with a price tag and someone made them. Arguably the same goes for famous musicians, yet somehow the robots can just do it better, and they're a new idea so they're more fun.

For this landmark robot concert that you can see below, Japanese pop-music which is never any good anyway, is delivered true to style with robots and live singers collaborating, as the girls customarily impersonate prepubescants and the Terminator guitarist scratch over multiple fretboards and waggle their flashing TV heads.
And who can match them? Aptly named "Mach" the guitar player has 78 fingers and uses 12 picks! Drum robot Ashura can play 22 drums with his six arms. Just think for a minute. Is the future we've always imagined, the dystopia we've been endlessly portraying since the first world war in novels and films finally here, and we're just too numb to notice its dawning? For while a full-on flashing lights Muppet Show performance would have had a similar kind of impact on an audience, once the human hands were out of sight, there'd be no life in the puppets. But Z-Machines (named aptly after the apocalyptic World War Z zombie movie starring Brad Pitt?) run on power with circuitry that contain information. At this point in time the robots are mere slaves, doing as we tell them and turning off when we switch them off. But how far is dystopia now?
Aside from all the analysis, you might ask what kind of visual spectacle it is. Well, it's hilarious - Animal-meets-Terminator-meets-Transformers set beside a school-girl Xfactor special...


OtherCosmo, the keyboard "player", was designed by Yoichiro Kawaguchi, an artist and professor at Tokyo University. These are guest produced machines. Creator DJ Tasaka who's music the robot band is playing, says the three robots in Z-Machines have the ability to create sounds that are impossible for three human musicians to mimic. He has obviously not heard The Gossip live.
The advent of the band follows on from experiments last year with a four armed drummer who looks perfectly gross. But don't complain too loudly, or manufacturers will start encasing these better-than-human performers in silicon dolls and we'll get cosy, just as Stephen Spielberg imagined in the film A.I. where Jude Law played a synthetic sex doll on the run Gigolo Joe, a male prostitute Mecha programmed with the ability to mimic love. And now years after A.I, silicon sex dolls DO have different programmable personalities. Yes, Spielberg and Charlie Brooker are on the money. Roxxy, who we've linked to in the last sentence, can even pick up on your interests such as soccer, and will email you about them. What kind of a pitiful populace are we catering for? No one deserves to be so alone they need a doll for company. We should be investing in reaching out to the lonely masses not increasing their cocoon-like solitude with toys.
Meanwhile the Japanse Z-Machine band, who appear almost cuddly compared to Spicy Susie and the Barely 18 dolls created by Roxxy's creator, recently performed their debut concert at the Future Party event "Post People, Post Party". All composed by Tokyo-based DJ Tasaka. And "Post people" it really is.
0 comments
Email ThisBlogThis!Share to TwitterShare to FacebookShare to Pinterest

August is off for Resonance104.4FM, programming is suspended in a strange summer haze of memories and thoughts...vintage and finely selected shows are coming to you 24-7 on air and online as you visit the past and realise how much of the future of arts, culture and society we'd correctly predicted and imagined on your arts-music radio station. Meanwhile, Free Lab Radio are fixing up for some live DJ gigs in Europe, and even recording an album of electro-acoustic improv, as Oscillatorial Binnage.


In the meantime check out the podcasts, whydonchyou! Neurostep, Maximalism, Middle East and Dungeon Humour, Speak Easty, Funk and Hiphopology, sound art with Haroon Mirza...reads like a sonic flights menu.

Scrunchy, crunchy, swaying left to right...for any of its shortcomings Japan Project is not a boring album, and we're enthused by this exploratory style that brings Japanese wood blocks and traditional strings up against breathy, vinyl-sampled vocals and electronic beats.