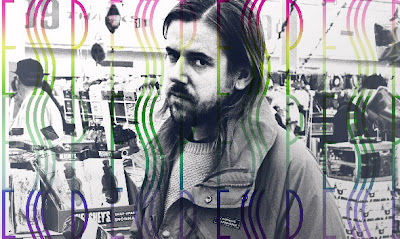 Lovefingers is Andrew Hogge founder of the ESP Institute label LA, USA. 11pm-midnight we play out Cosmic Disturbances, a mix for Lovefingers that is a well-selected vinyl catalogue of space travel, politico funk and kraut rock and 70s electronica. This mix was done for the site lovefingers.org by Hogge's friend Tim Koh (the bassist in Ariel Pink's Haunted Graffiti).

"I grew up with hardcore, which encourages you to get super into 7”s and colored vinyl and that kind of stuff. As far as connecting the dots, though, I guess that happened when I went to art school, which is when I met Tim Koh – the bass player in Ariel Pink’s band – and Eddie Ruscha, through Tim. And I started listening to a lot of random shit. There were a lot of mixtapes going around then, too… kraut rock and Aphex Twin and whatever else, thrown into a bag and mixed all weird. I guess the Dublab guys come from a similar place. I just found that awesome, how these songs could have nothing to do with each other, but, at the end of a tape, you’d be like, F*** – that was a journey. From there, any crate-digger dude just starts going down these avenues of discovery. Like, Okay – this one guy, what else did he produce? Just following the clues."
Hooge interviewed for Juno Plus Magazine.
0 comments
Email ThisBlogThis!Share to TwitterShare to FacebookShare to Pinterest
Labels: andrew hogge, cosmic disturbances, esp institute, Free Lab Radio, juno plus magazine, lovefingers, vinyl mix

Thanks to Non-Classical for bringing this inspiring track and video to our attention, John Matthias and Nick Ryan's 'Cortical Songs' remixed by Thom Yorke as his 'Neuron Trigger Mix'. A Scratch Pictures Production the film and track describe a tension and voice deeply rooted in classical tradition, yet thriving in the digital age.
Non-Classical events promote pioneers in both electronic and acoustic music.
0 comments
Email ThisBlogThis!Share to TwitterShare to FacebookShare to Pinterest
Labels: contemporary, John Matthias, London, Nick Ryan, non classical, Thom Yorke

Soon to burst out with his debute album, El Mahdy Jr sent in this one hour ong mix called Fist 2 Fist. Algerian born, living curently in Konya Turkey, while before he was living before in Burkina Faso. "Always attracted by the sound and music of the places I have been. what I try to do in my music is to sample that spirit of the 3rd world. trying to tell the stories about places that are never conquered by tourists. soon an album will be released from a label called Boomarm nation."
0 comments
Email ThisBlogThis!Share to TwitterShare to FacebookShare to Pinterest
Labels: algeria, boomarm natioan, DJ, el mahdy jr, Free Lab Radio, mix, producer, resonancefm

If You See One Video This Year It Must Be This.

Sound designer Andrew Thomas Huang directed his own video to immense effect. Touching on the cultures of electronic circuitry (keep an eye out for the furby and recall that Peter Rockmount and Chris Weaver performed live on Free Lab Radio as the Dismantlers with an all-furby orchestra), and on the organic, unconscious feminine power awoken by trance rhythms and described in pagan mythology, touching even aspects of cultures The Matrix left in its wake, Huang's audio and video refreshes all of us who felt 'nothing original is ever made any more'.  And don't scoff because of 'feminine power', check out Jung extrapolating below.
0 comments
Email ThisBlogThis!Share to TwitterShare to FacebookShare to Pinterest
Labels: Andrew Thomas Huang, resonancefm. furby

Brian May, one of the wonderful producers submitting audio for our Six Pillars radio station at Art Dubai, has created this below. The Sonic Network series is part of an ongoing international collaboration between Aslanidis and May with installations staged at Dr Julius Gallery, Berlin in 2011, plus at New York’s White Box Gallery & Kunsthalle Beacon in Upstate New York during 2012. Sonic Network no.11 + a composition by Brian May is on permanent display in the Hamer Hall, Victorian Arts Centre Melbourne. 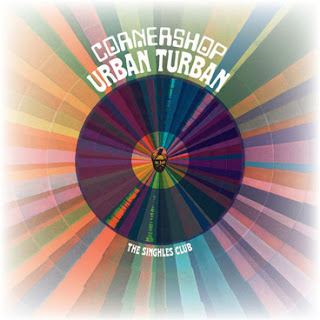 Soon to perform in London Ben Ayres of Cornershop gave us an interview plus a medley of their tracks, recent and classic, he's put together for Free Lab Radio.
British indie rock band Cornershop have been going since 1991, formed by Wolverhampton-born Tjinder Singh (singer, songwriter, and guitar) and Ben Ayres on guitar, keyboards, and tamboura and former members Tjinder's brother Avtar Singh (bass guitar, vocals) and David Chambers (drums).  The band famously burned a picture of Morrissey outside EMI's office, photographed by Melody Maker magazine, and were joined later by the likes of Bubbly Kaur on vocals. The band became widely popular after Norman Cook's remix of Brimful of Asher in the 90s and have released 7 albums and many singles since 1991. Ben discusses what he's been listening to, the band's label Ample Play run with Tjinder's wife and their forthcoming gig, as well as brushing aside common misconceptions about the band. Ample play represent The Sufis, Cornershop, The Paperhead, Izzy Lindqwister, Matsuki Ayumu and more.
Listen in on 104.4FM across London or www.resonancefm.com/listen elsewhere - 11pm-midnight.
0 comments
Email ThisBlogThis!Share to TwitterShare to FacebookShare to Pinterest
Labels: 2013, ample play, ben ayres, cornershop, gig, interview, Izzy Lindqwister, live, London, march, Matsuki Ayumu, norman cook, performance, records, The Paperhead, The Sufis
Newer Posts Older Posts Home
Subscribe to: Posts (Atom)